Whats all the big hype about Bali?

For as long as I can remember, I've always wanted to go to Bali.
Simply because it looked really beautiful and romantic from pictures.

I took the opportunity to go over the long Easter weekend this year.
Flight tickets were booked over a year ago.
But when the date came closer, the more unsure Sean and I were on whether we could go for this trip.
Sean couldn't get an exact date that he was going to be sent on a job.

A couple of weeks before, we also decided to end our apartment lease and move back home.
Just three days before the trip, Sean said "I've got news for you. We're gonna have to finish moving before Bali. I'm only going to Holland on Tuesday".

Ohmygawd I was excited but stressed out as well.
So much packing to do, I've to work and we haven't even booked any accommodation for Bali.
That's how last minute my trips have been since Christmas.

We managed to move everything and book accommodations just hours before our flight.
I was just looking forward to a relaxing holiday in the end.

We booked a villa at Furama Xclusive in Ubud.
We chose to be close to the paddy fields instead of the beach because we live close to the beach back home.
Little did we know, Ubud was ages away from most places.
Well, to be fair.. we didn't do any research because we really didn't think this trip was going to happen.

From the time we got into a cab till the very end of the trip, we were cheated left right and center.
Our cab ride from the airport to the hotel cost us AUD40.
Later we learnt that you should only pay AUD20 for it.
That evening, we took the free shuttle into Ubud town.
Had a nice meal at a nice restaurant.
And went looking for a nice bar.
But guess what?
There are no bars or pubs and obviously no clubs (not that i wanted to go to one) in Ubud.
We finally found a place that looked really chilled out  and cosy called the XL Shisha Lounge.
Lotsa cushions on the floor to sit on and coloured cloth draping down from the top to give it the tent feel. 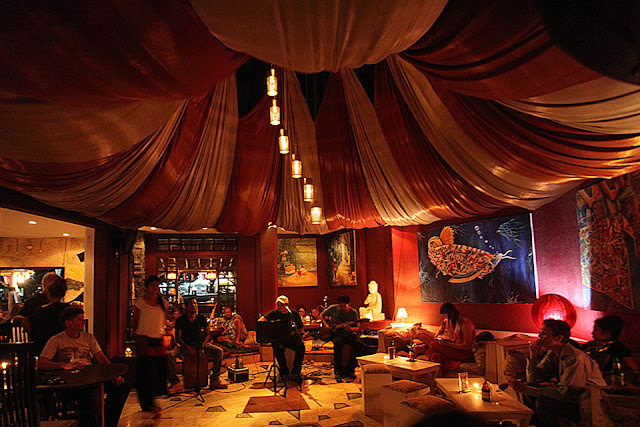 okay fine.. i nipped the picture off the net.

We had shisha, cocktails and some samosa's.
Which was not bad and not great either.

On some nights, they have really good live music.
Really talented travellers and locals get together to make good music.
It was so good, we went there 3 nights in a row.

I had a go at shisha for the second time in my life.
I'm still not good at it.
I'll make a really bad smoker if I smoked. 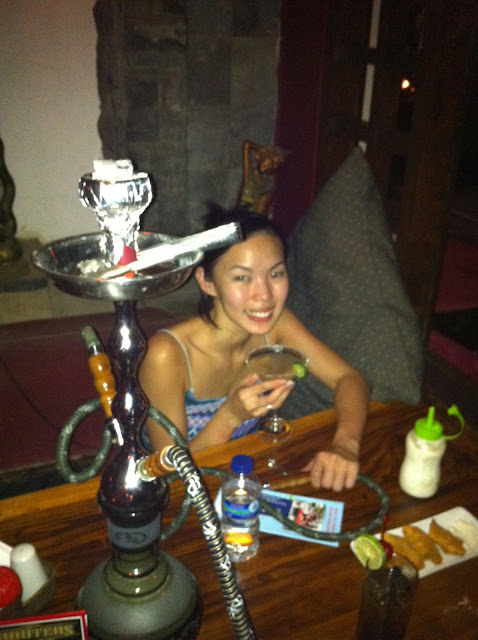 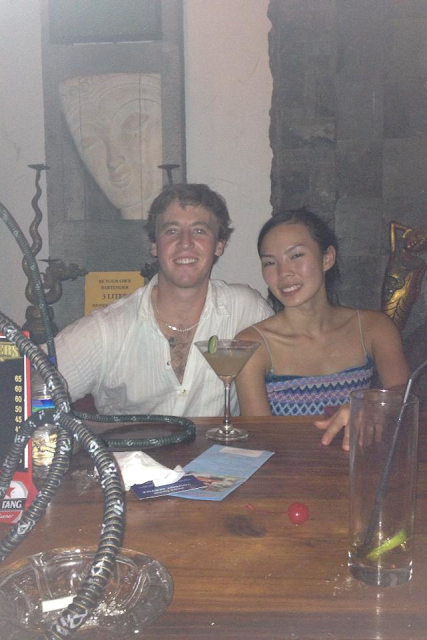 That night, the hotel driver (David) said that he does private tours and asked if we wanted to hire him for a day. We decided to just go ahead since we haven't arranged for any tours yet.
Agreed price, USD 50. pretty standard price to hire a driver for the day.

Our plans were to go to:
- the volcanos
- Potato Head
-buy some paintings
-and maybe see Uluwatu

We had an early start so we decided to get breakfast sent to our villa.
I don't know why but we decided on a western breakfast. 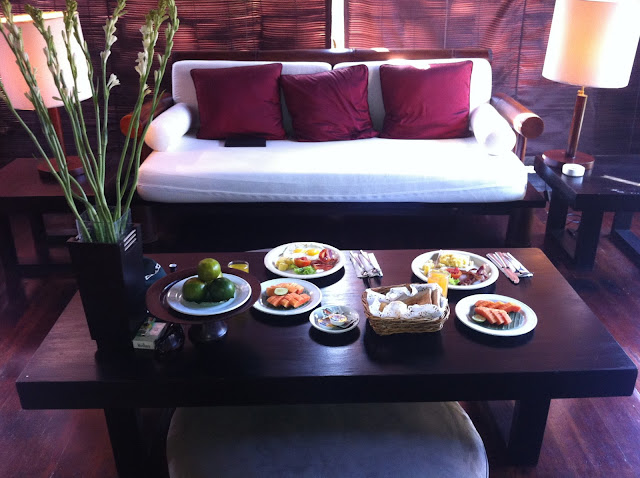 David was punctual and off we went to what we thought would be what was decided the night before.
The cultural dance we were suppose to go to was cancelled according to him.
So we went to buy some silver instead.
Which was fine with me.

After that David insisted we tried the Lawak Coffee which was close by.
Shortly after, it starts raining and he tells us we can't go to the volcanoes because its too misty.
So off we went to have lunch at the paddy fields terrace.

We ordered gado-gado, mee goreng (more like indo mee), samosa's and 2 lemongrass teas.
Friggin came up to AUD60 after the redonculous amount of tax (something between 18-21%)
Bloody Hell! 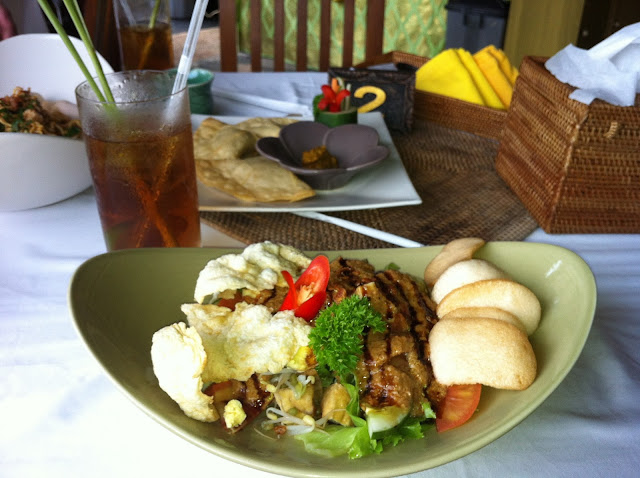 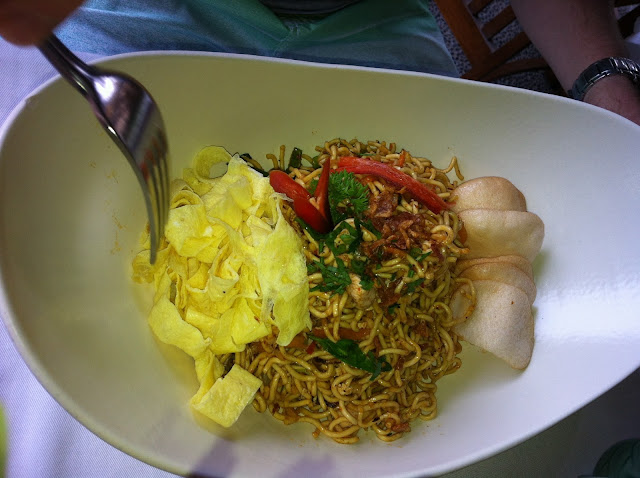 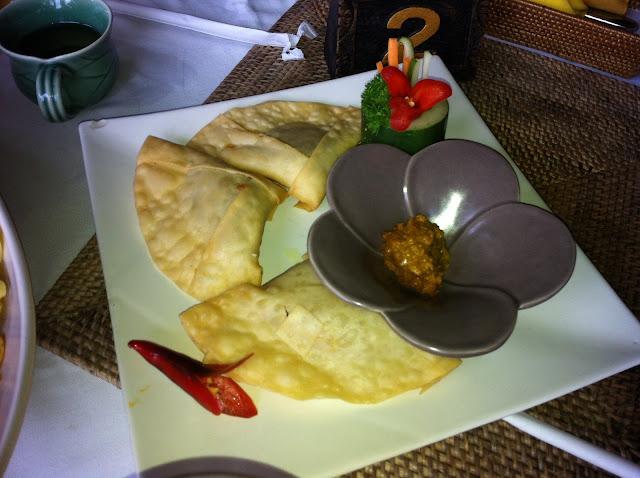 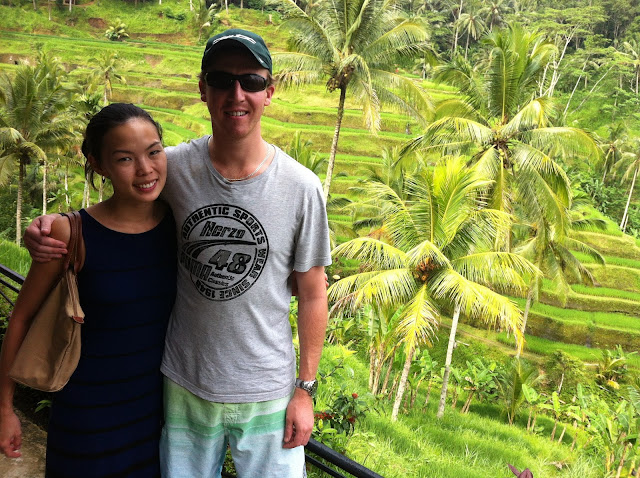 It gets worse. We get taken to this family owned place that sells paintings and he says I can only bargain 20%. What a whole load of crap is that?!! Everyone knows you're suppose to start bargaining at 80% and settle for no less than 50%. I managed to get 50% but at the end of it, I still think I got ripped off. Especially since I've an 'ang mo' guy with me. I'm doomed for life to pay artificially hiked up prices.

To cut the story short, we ended up hiring the driver for another day. Hoping to go to the places that we had planned to go. But again, we didn't get to go to the volcanoes because he said its too far and its better to go to Uluwatu and Seminyak side. We went to Uluwatu. And I don't know what so nice about it. Took us just 10 minutes to walk in and out.
Okay, so I can't go to the volcanoes, I bought over priced paintings, have over priced shitty meals, Uluwatu was a disappointment, at least let me go to Potato Head.
But No!! Friggin David said, "Why go to Potato Head? It is over priced, full of tourist and has bad views. I'll take you to Jimbaran. You can choose your seafood and have it cooked any way you want, and have dinner right on the beach".
Sounded good. But it was just stupidly overpriced and tasteless.
Tax was 21%. 1kg of lobster was AUD 79 before tax.
A shitty grilled fish, squid, 8 satays, kangkung belacan, steam rice and 2 cocktails came up to friggin AUD90!!
If it tasted great, I wouldn't have mined. But it was TASTELESS!! 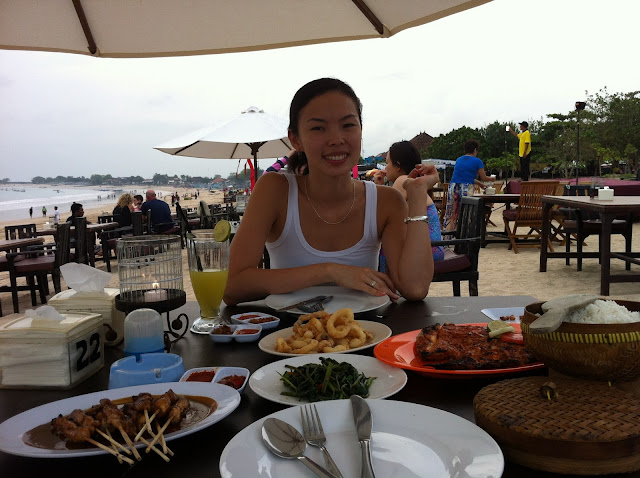 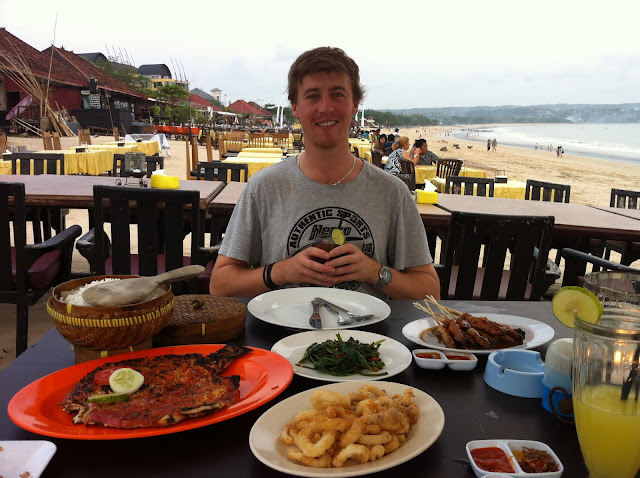 That night, I was woken up by the most horrible cramp I've ever had.
Yup, I caught the Bali Belly.
Spoiled my last day.
No potato head for me.

I don't know what took us so long, but only at the end of the 2 days with David did we realise he was conning us and getting a commission out of everything we spent. He could have just been honest and I would have happily and willingly given him a big tip. He talks so much about karma. I just wonder how karma will get back at him.

I think Bali is over-rated. Eventhough alot of people absolutely love it and we probably just got unlucky this trip, I definitely won't be racing back anytime soon.
Maybe someday, I'll give it another chance.

*sigh.. what a waste of my public holidays.